The Wrong Stuff by Guy Thair 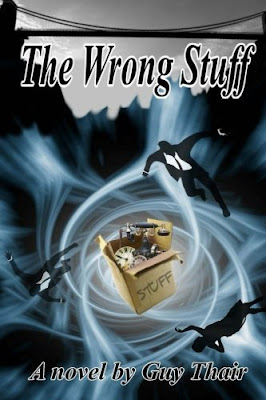 Q: Welcome to the Fossend Publishing blog Guy. Can you give readers a brief overview of your book The Wrong Stuff.
A: Hannah Meredith has always had a good eye and she's a veteran bargain hunter, but she isn't prepared, when she buys the box marked "Stuff" at a mysterious auction, for her world to suddenly unravel into a series of increasingly bizarre and terrifying events.
Soon on the run from a sinister cabal of vengeful corporate villains and their homicidal henchmen, Hannah must foil an evil plan to bring the world to the brink of global economic collapse, all the while keeping one step ahead of her pursuers.
A fast-moving thriller with a sci-fi twist, the plot stretches from chases through grimy backstreets of Victorian London back to the present day, where sudden violence shatters the tranquility of the English countryside.

Q: What inspired you to write The Wrong Stuff?
A: I have been writing short stories on my blog for the last couple of years. I use writing prompts from other bloggers to inspire me and, in November of 2015 I began a story based on the single word, "Stuff".
After reaching the end of the initial post I thought the story was worth continuing, so I decided to use each subsequent prompt to write a new chapter, until to my surprise I had written over 50,000 words and appeared to have a book on my hands.

Q: You have mentioned that The Wrong Stuff is an unusually composed accidental novel. Why did you choose this particular way of working?
A: It's how I always write; unplanned, improvised and with only the very vaguest idea of where it will end up.

Q: Did writing The Wrong Stuff involve any research?
A: Nope, none at all. It was written as part of "Stream of consciousness Saturday", a blogging feature I take part in and the rules preclude anything other than the barest minimum of advance planning.

Q: What do you enjoy the most about writing?
A: I've always loved words and language, so making them tell stories is all part of the fun. Also, since I never plan anything, writing my stories is just as much of an adventure for me as it is for whoever ends up reading them.

Q: What do you dislike the most about writing?
A: I can't think of anything. My main problem is finding the time to write.

Q: Can you share a typical day in the life of Guy Thair as a writer?
A: A typical day? Well, I have a family and a full time day job, so all my blogging/writing activities have to fit in around that. I try to get as much done at the weekend as possible, but I have a young daughter to keep entertained and that usually means the bulk of my work is crammed into a few hours each Sunday, when she's either out playing with her friends or glued to YouTube. With three of us living in a small flat, it's often difficult to find a quiet place where I can concentrate, so I make the most of any peace and quiet as and when I can get it.

Q: What’s next for Guy Thair?
A: Well, my publisher has already asked for a sequel to The Wrong Stuff, so I shall have to begin work on that soon, but in the meantime I will continue blogging; making stuff up and writing it down for my own entertainment, just in case I write another novel by accident.

Quick fire round
Beach or countryside - Countryside, I can think of anything more tedious than sitting on a beach all day.

EBook or paperback - Paperback every time.

Classic or modern - A mixture of both, I think.

Notebook and pen or computer - Just my phone, I've never needed anything else 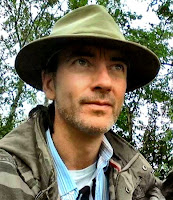 After growing up in Sussex, (in the hometown of AA Milne and Sir Arthur Conan Doyle, creators of Winnie the Pooh and Sherlock Holmes respectively)  Guy Thair now lives in Devon, in the South West of England with his wife and daughter (who are American and whose story is documented in my blog; A Love Affair) and he has been blogging under the byline of "dalecooper57" for about five years. Guy's various blogs cover everything from fiction and photography to animation and music, all of which he has managed to achieve using just his smartphone. Guy work's for an American aerospace firm and most of his spare time is spent with his family or finding new writing projects to get involved in.