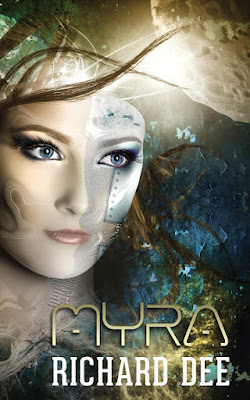 I’d like to welcome Devon author Richard Dee to the Fossend Publish blog. Richard is releasing his next book Myra on March 15th 2017. In advance of the launch Richard is sharing his fantastic book cover, the book description and the first chapter of the book that is available to read on his website.

Book Description:
"I turned, and even though I didn’t immediately realise it, it was then that I fell in love.”
Meet Dave Travise, at least that’s who his identity chip says he is. An ex-Navy man on the run; somehow he’s ended up in a dead man’s shoes; on a new ship and on the wrong side of the law. With no way to prove his innocence, he’s just got to play along and keep his head down if he’s going to survive. As if he doesn’t have enough problems, now he’s fallen for Myra, the engineer on his new home.
Pursued by criminal gangs and keeping one jump ahead of everyone, Dave and his new shipmates are going to need all the luck in the Galaxy just to stay alive.
Myra tells the story of how Finn Douglas, Naval Officer; became Dave Travise, Galactic Trader. And what happened before Freefall."

The first chapter is available now on Richard’s website.

About the Author:
Richard was born in Brixham in Devon in 1958. As a teenager, he left Devon and moved first to London and then to Maidstone in Kent. In 1975, after a spell working in a Safeway supermarket (Remember them?) Richard went to Sea and travelled the world in the Merchant Navy, qualifying as a Master Mariner in 1986.
In 1988 he gave up the four to five-month trips and came ashore to spend more time with his family. Richard used his sea-going knowledge in several jobs, including Dockmaster at Tilbury, Insurance Surveyor and Port Control Officer in both Sheerness and London,
In 1994 Richard was head-hunted and offered a job as a Thames Estuary Pilot. In 1999 he transferred to the Thames River Pilots, where he regularly took vessels of all sizes through the Thames Barrier and upriver as far as H.M.S. Belfast and through Tower Bridge.
In all, Richard piloted over 3,500 vessels in a 22-year career with the Port of London Authority. Richard appeared on National Geographic “Megacities,” where he described the process of taking a sailing ship through Tower Bridge.
Richard was offered part time work in 2010, which allowed him to return to live in Brixham, where he took up writing and blogging. During this time, Richard also set up and ran a successful Organic bakery, supplying local shops and cafés with Sourdough and Spelt breads. The urge to write eventually overtook the urge to bake but Richard still makes bread for friends and family.
Richard finally retired in 2015, by which time he had already self-published his first science-fiction novel “Freefall.” With more time on his hands, it was followed by “Ribbonworld” in 2015.
September 2016 saw the publication of Richard's Steampunk adventure “The Rocks of Aserol.” and “Flash Fiction,” a collection of Short Stories.
Richard contributed a story to the “1066 Turned Upside Down” collection and he is currently working on prequels, sequels, and new projects. The prequel to “Freefall,” entitled “Myra,” will be published in March 2017.
Richard publishes through his own imprint, 4Star Scifi, named in homage to his wife and daughters, his 4 Stars.
Richard Dee is Richard's pen name.